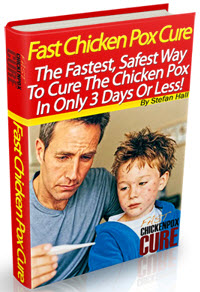 Clinical features A generally mild disease, chickenpox is a common infection of children. Illness commences with fever followed by a characteristic skin rash of macules, papules, vesicles, pustules and dried crusts. The lesions occur in groups, appearing over several days, so pox of different stages will be seen at the same time. In chickenpox, the rash is distributed centrally, appearing on the chest and abdomen and sparsely on the feet and hands.

The majority of people contract the disease in childhood when it is an inconvenience rather than a life-threatening condition, but if this has not occurred and if they subsequently develop the illness as adults, it can be very serious. This is a particular problem in island and isolated communities where varicella can be a fatal disease in the elderly. Pregnant women, who contract the disease in late pregnancy or shortly after delivery, are at risk of severe generalized chickenpox with a 30% mortality. Neonates who develop chickenpox within 10 days of birth are liable to a serious generalized infection. Chickenpox in early pregnancy may result in congenital malformations. Death results from generalized viraemia, pneumonia, haemorrhagic complications, encephalitis or cardiomyopathy.

The virus remains latent in the body, lodged in nerve bundles, and in later life, especially during a debilitating disease (such as HIV infection), the identical virus

(VZV) causes shingles. This presents as a vesicular rash with erythema in a well-defined area of skin supplied by the affected dorsal root ganglia. Pain and paraesthesia occur along the course of the affected nerve.

Diagnosis is on clinical criteria, especially the central distribution of the rash and the presence of lesions at different stages, differentiating it from smallpox. Any case of a pox rash that dies or has an unusual distribution should be a smallpox suspect (see Section 18.2).

Transmission The infection is transmitted by fluid from the vesicles. This can occur in the pharynx before the main rash, when transmission is by droplets; otherwise, the spread occurs by direct skin contact, airborne dispersion of vesicle fluid or through articles soiled by discharges.

Incubation period varies from 2 to 3 weeks.

Period of communicability is from 3 days before the onset of the rash to 6 days after its first appearance.

Occurrence and distribution Chickenpox occurs worldwide in an epidemic form often spreading serially (Section 2.2) from one place to another. It is a disease of children in the temperate regions, but is more commonly found in adults in the tropics.

A live, attenuated varicella virus vaccine has been developed, but is not widely available. It is useful for vaccinating high-risk groups, such as women of childbearing age, who have not had chickenpox as a child, and the immunocompromised. There is a risk in using vaccination by shifting the age of developing naturally acquired chickenpox to older age groups where the disease is more serious, making it unlikely to become part of the routine childhood vaccination programme.

Treatment Acyclovir and vidarabine can be used to treat adults, children with serious disease and older persons with shingles. Human varicella-zoster immunoglobulin (VZIG) is available in some centres and can be used within 10 days of exposure for contacts liable to develop severe disease, such as pregnant women, neonates and the immunosuppressed.

Surveillance Outbreaks should be reported so that susceptible individuals can be protected and given vaccination if available. Any suspect case of smallpox must be reported to WHO.

Have you ever wondered how to fight allergies? Here are some useful information on allergies and how to relief its effects. This is the most comprehensive report on allergy relief you will ever read.

How To Cure Chickenpox In 3 Days